Chien Andalou marked the entry - via film - of Bunuel and Dali into the Surrealist movement in the 1920s,
led by Andre Breton and Louis Aragon in Paris. But during the making of its sequel, L’Age d’ Or, the two
film makers fell out. (Maybe this happened because, Bunuel wanted to introduce Marx as well as Freud,
in opposition to Dali?).

These two films represent the only ‘pure’ examples of surrealism on film (associated with the idea
of automatism; see below). To their great surprise, Chien was welcomed by French bourgeois connoisseurs
of the art film, whereas it was their intention to shock the latter. Thus they were determined to make amends
with L’ Age and duly succeeded.

In  its authentic form, apropos the medium of film, narrative structure is disrupted by subversive symbolism. If Bunuel is regarded
as ‘the magician of the unconscious’,  surrealism bases itself on Freudian psychoanalysis, dream ‘logic’ and its significance to the
waking mind. Therefore Chien exploits the surealist fascination for ‘automatism’ or the  faithful adherence to the voice of one’s
unconscious, unaffected by rational intentions. It is based on Bunuel’s dream in which ‘ a tapering cloud sliced the moon in half,
like a razor slicing through an eye’, as well as Dali’s dream of a ‘hand crawling with ants’. 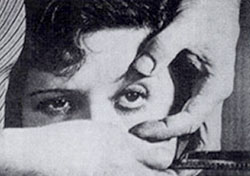 Chien restricts itself to two young lovers who are perpetually frustrated,
because their attempts to achieve sexual fulfilment are repeatedly deferred,
not by external society and its authoritarian strictures/ constraints/interventions
(eg. by the clergy or public authorities in the name of God and human decency;
rather they are the victims of disturbing distractions, such as fear of castration
or the sexual fetish (shades of Freud’s famous case study, vis the lady with
the shoe fetish), etc. At the same time the audience is frustrated by the
absence of a coherent story, which is continually snatched away,
e.g. by crawling ants.

L’ Age, on the other hand, establishes a broader canvas, the class struggle and history, in accordance with Breton’s second
surrealist manifesto: ‘religious susceptibilities are joyfully outraged as Bunuel has de Sade’s paedaphile debauchee, the
Duc de Blange, double up as Jesus Christ’ ; quite apart from an whole arsenal of filmic and narrative devices which prevent
the audience from achieving any sensible reading. Thus the ‘howls of protest that greeted L’Age d’ Or were music to surrealist ears’.

Just as Eisenstein succeeded with his political montage, in which ‘decoupage’ is the ‘key to expressivity in film’, Bunuel  seeks
to manipulate his audience by means of the cut. The cut also refers to sexual desire and sexual frustration, which leads to fears
of male castration and ultimately to fetishism (applicable to both sexes). The latter becomes a substitution for the object of desire
as a corporeal whole, i.e. it takes the form of a substitute part or object, which performs a cruel diversionary role; e.g. in Chien,
the shot of the clothes laid out on the bed, the insertion of a plough or the striped box, etc. or the deliciously perverse toe-sucking
scene in L’Age! Therefore fragmentation rules both in the couple’s attempt to consummate their desire for each other and within
the film itself. Thus Bunuel shows us that human desire is riddled with contradictions, which are also deeply ingrained within
the culture of bourgeois society.

In addition, Freudian psychoanalysis introduces the notion of the conflict between the sexual instinct and the death instinct,
as two sides of the same coin. One’s desire for the other leads to a loss of individuality, albeit temporarily, in which the death
instinct is played out, if only symbolically. (Hence the French equation of  sexual fulfilment as ‘le petite mort’). Eros therefore finds
itself up against the instinct for self preservation. On the one hand, our aspiration for  l’amour with the desired other is regarded
as the ultimate fulfilment of the human being; on the other, individual egoism may destroy such a goal. It can even lead to violence,
either verbal or physical. This is exacerbated by patriarchy. consider the musical soiree episode in L’Age, wherein the frustrated
gentleman slaps the older woman, because she dares to interrupt his pursuit of the younger, more attractive one.

To continue on this broader level, modern bourgeois society (especially catholic Spain circa the 1920s), given its fear of eros, tries
to contain it, via religious repression and  punishment, including violence if necessary. Thus the death instinct is played out within
society at large. Surely that is the reason why Bunuel scandalously added the episode of the aristocratic debauchees; they were
not just content to deflower divers young virgins in their alpine retreat; they also had to rape them to the point of death, including
the Jesus figure! (Cf. the use of rape as a weapon of war.) L’age is an early sound movie -  Whereas earlier episodes are accompanied
by high art music, e.g.  the Tristan and Isolde theme, which constitutes an amusing juxtaposition, given the squalid events which
are taking place (sex-on- hoof so to speak, even if it goes wrong!, etc.); the final scene ends with a shot of a wooden cross,
adorned with female scalps. But now it is time for some light tango music!

Whereas Eisenstein presents us with ‘a montage of attractions’ (incitement to revolution, as the path to human emancipation),
Bunuel presents us with a ‘montage of repulsion’ (such as castration and debauchery) as a means to upset our conditioned reflexes.
Thus he offers his own - and surrealism’s - take on bourgeois society, which is far more disquieting than Eisenstein’s. It also helps
explain why the ‘pure’ surrealist film (based on the automatism principle) never really took off. Thus all that we have to fall back
on are Bunuel’s later films, which are less pure (since they they are rooted ‘automatism’ ; they are broader and more playful in scope);
albeit they are still masterpieces, e.g. Viridiana (1961) and That obscure object of Desire (1977).

Prelude: a young woman sits compliantly as Bunuel takes a razor and slices her eye open; film then adopts style of a documentary,
albeit in a dream-like state, i.e. ‘dream logic’/ surrealist exposition, random images, e.g. a swarm of ants, underarm hair, a striped box;
addressing, opaquely, Freudian sexual theories [stages in sexual development, anal, oedipal, etc. ? Not to be too precise!] because
‘everything symbolises something else’ [a la Freud!] Bunuel and Dali strive to be outrageous in their contempt for catholic  and political authoritarianism, as well as the hypocrisy of the bourgeoisie, as well as  sexual repression and which characterised Spain during that
period; they get away with it by  dressing their critique up as an art film (which it is). Originally silent, but later three sound tracks
were added; one includes Wagner’s Tristan and Isolde music plus a tango!

A sort of dress rehearsal for the later 1930 film. But thgese themes run right throughout Bunuel’s ouevre.

Based on Bob Baker’s review for Time Out Film Guide, 2006.

‘Our sexual desire has to be seen as the product of centuries of repressive
and emasculating Catholicism....it is always coloured by the sweet secret
sense of sin’ mused Bunuel in his autobiography My last Breath. One might
describe [this film] as 63 minutes of coitus interuptus, a scabrous essay
on eros and civilisation...a couple are constantly prised apart from furious
love-making by the police, high society and, above all, the Church.

Financed by the Vicomte de Noailles [Cf. the Maquis de Sade], a dream
patron who loyally announced the film exquisite and delicious, even
as rightwing extremists were pelting it with ink and stink bombs, this
is a jagged momento of that Golden age before directors forgot the art
of filming erotica (the celebrated toe-sucking is sexier by far than almost
anything since), the revolutionary avant garde lost its sense of humour,
and surrealism itself fell prey to advertising agency chic.’