I was a Soviet worker 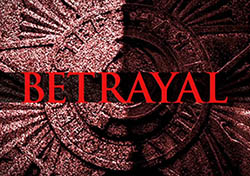 This is my first screenplay. It is a free adaptation of a memoir written by two Americans who went to work in the Soviet Union in the 1930s.  The story was introduced to me by my friend and co-producer, Paul B. Smith. My motto is, 'truth through fiction!'

We are currently in pre-production on the project. View our Pilot: VIMEO.

In addition to the screenplay, thanks to Paul and the help of an excellent graphic designer,
John Goodinson (now a mutual friend), we have made a twelve minute video - or pilot-promo - also called BETRAYAL, as a means to promote the screenplay (link above to Vimeo); plus a vimeo of a crucial scene involving the two protagonists.

This an historical epic, which combines the personal and the political.  Like thousands of others in the 1930s,, two American workers - Andrew and Maria Smith -  emigrate to the Soviet Union.  As guest workers, they wanted to make a direct contribution to building socialism in the first workers state. Andrew, certainly,  saw the Soviet Union as a bastion against a hostile capitalist world, wracked by the Great Depression and the rise of fascism.

Instead they discovered  the harsh reality of Soviet Russia at the end of the First Five Year Plan. 'Socialism-in-one-country' would not go. The consequences of national autarky were: wage slavery worse than anything in the west, forced collectivisation, man-made famine which killed millions, the gulag, disappearance and the firing squad; in a word, the rise of Stalin's terror state - the antithesis of socialism, as explained by Marx. Unlike many others, after much tribulation, they resolve to return to America and tell the truth. But this wasn't going to be easy. First of all, Maria is a 'closet' Trotskyist! Secondly, Andrew can't keep his mouth shut! So what are their chances of escape?

Ideally we would like our screenplay to be made into a feature film to be released in time for the centenary of the October Revolution; or it could be made in a stripped down way (using minimum set arrangements, i.e. Brechtian style) to reduce costs, make the project more manageable. Another idea is to turn the screenplay into a radio play. Whatever medium is chosen, we hope that this will help stimulate interest in the revolution and raise serious questions: Why did it fail? Why does this matter?

This email address is being protected from spambots. You need JavaScript enabled to view it.

Stills from the Video

We hope to stream the video - along with the screenplay - on this website in due course. However, at the moment we are hosting
our video on 'VIMEO'.

See stills (below) from the pilot production.